(I may earn a small commission from the products mentioned in this post.)

When preparing for knee replacement surgery I wondered which medicines were best for my recovery.  I’ll share what worked for me and the best medicines for recovery from total knee replacement (TKR). My doctor, the hospital team, and my physical therapists recommended the items below.

The daily aspirin and stool softener was prescribed by my doctor, however the medicines, lotions, creams, ointments, and wipes were suggestions from doctors, nurses, and physical therapists. I found all of these items to be useful if not necessary to aid in my recovery from knee  replacement surgery.

In the days after my surgery I had family driving back and forth from the pharmacy.  I hope that you’re able to find these items before TKR surgery so you’re better prepared than I was.

While I was in the hospital I was told that going to the bathroom was very important. It actually took me 3 days until I had my first bowel movement after TKR surgery. While I was at the hospital the nursing staff began giving me a stool softener.

They suggested that I have some at home and to take it as directed on the label. They advised me that the pain medicine I was taking (Percocet) could cause constipation. When I arrived home my wife purchased a supply of stool softener and I began taking it as directed.

My first bowel movement was difficult but after that I was pretty regular. I continued to take the stool softener until I weaned myself off the Percocet on day 13-post surgery.

Your hospital team will probably suggest stool softener. If not, consult your doctor before taking it. It worked well for me during the time I was taking Percocet.

When I quit using Percocet I took one or two pills for a few days and then I quit taking them completely at the beginning of the 3rd week post surgery.

When I met with my doctor a week before surgery he told me to buy a 30-day supply of Aspirin (325 mg).

He wanted me to take one pill daily for the first 30 days post surgery to help prevent blood clots.

I took the aspirin for blood clots the first thing when I woke up in the morning with a full glass of water. It not only helped prevent blood clots but it may have helped reduce inflammation and pain.

I was told to take aspirin so I followed my doctor’s direction. You may be on blood thinners and your doctor may have another plan for you. Ask your doctor before taking aspirin.

How Long To Take Aspirin After Knee Replacement

I plan on taking one Aspirin daily for at least a few months.  I feel it’s helped with swelling, inflammation and pain.  If I take it for a longer period of time I may try to reduce the dose (take a smaller amount).

My doctor has only told me 1 pill for thirty days but I know it will be good to take when traveling (such as flying) and before intense physical workouts.  Ask your doctor how long you should take Aspirin after knee replacement surgery.

You might know the name Meclizine as the ingredient in “Dramamine”.  In the hospital, I first experienced nausea after taking oral Percocet. My hospital team gave me a pill for nausea and suggested that I buy an over the counter pill that contained Meclizine.

I frequently go sailing with a friend who has a boat. Before sailing, I always take an All Day Less Drowsy Dramamine pill that contains Meclizine.

No. 4 Sanitizing Wipes (for skin around wound)

I was unable to take a shower until the 13th day post TKR surgery. My staples were not removed until 12 days post surgery. I bathed with a washcloth while sitting in a chair next to a sink.

I did not use the washcloth on or near my incision. I used sterile wipes during the first 12 days to clean around my incision. I never used the wipe directly on the incision.

I was careful to clean as close to the staples as possible avoiding the incision itself. This worked well for me, as I was not about to rub any kind of cloth over or near the staples.

I always put some ointment on before doing my workouts because it made the flexion easier. I did not apply the antibacterial ointment at night because I didn’t want it on the bedding.

I really did not bend my knee much during the night so it was not as necessary.

No. 6 Free Up Massage Cream

During my first visit to the offsite physical therapist he massaged my knee with Free Up Massage Cream. He said any lotion would work but that therapists use Free Up because it doesn’t absorb into the skin like most other lotions.

He suggested I or a family member massage the knee at home just like he did during every workout. When I got home I ordered a jar of Free Up. I’ve been pleased with the product and I use it 3 times a day with massages.

I also like that it’s not as greasy as some other lotions. I use a towel to wipe the knee after each massage and there is no greasy/oily feeling afterwards. 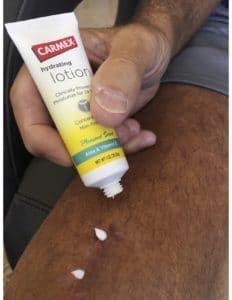 No. 7 Lotion With Aloe and Vitamin E

The offsite physical therapist noticed the antibacterial ointment and said that since my wound had closed he would suggest a lotion with Aloe and vitamin E to put on the incision to keep it hydrated.

He told me that it would keep the skin around the incision soft and supple and it would restore moisture. The therapist recommended Carmex Hydrating Lotion with aloe and vitamin E.

When I went home afterwards I ordered a 3 pack of 1-ounce tubes along with my Free Up Massage cream.

The thirst and the dry lips may have been a result of taking the pain medication. I always kept lip balm next to my recliner and also on my nightstand. I used it frequently during the day and during the night.

I like Burts Bees lip balm because it’s natural but most people have their preference when it comes to lip balm.  Find one that works for you and keep it close by.

Percocet was the pain medication prescribed by the hospital for me. On day 6-post surgery I began taking a Tylenol-like product (acetaminophen) so I could take less Percocet.

I was advised by my physical therapist and by the label on the container never to take more than 4000 mg of the product per day. For the first few days I took up to 3000 mg a day.

That included the 325 mg of acetaminophen contained in each Percocet. I usually took 2000 mg (4 tablets a day) through the third-week post surgery. During the 4th week post surgery, I only took 2 pills a day.

I timed the pills so that I took one before my first workout. I took the second pill right before going to bed.

All of the above over the counter medicines and products aided and helped speed up my recovery. I wish that I had been more prepared. The aspirin and stool softener were the best products that I was told about before surgery.

If I had known about the other items I would have had them ordered and waiting for me at home. According to my doctor, the aspirin and the stool softener were essential.

The nausea medicine, wipes, ointments, creams, and lotions were all suggestions from my caregivers. I’m glad that they suggested the different products, as they were all very useful and important for my recovery post TKR.

I hope you now have more understanding about some of the things that you might need when you come home from the hospital.

It’s easy to forget some of the little things that make your recovery easier and more comfortable. You won’t spend a lot of money for these items and I’m sure you’ll be happy with the results.